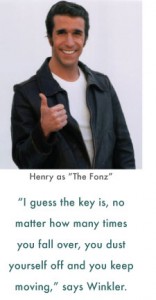 Actor Henry Winkler who is most famous for playing Arthur Fonzarelli aka “The Fonz” in Happy Days, was diagnosed with dyslexia aged 31 after recognising similar characteristics in his newly diagnosed step-son.

Without realising, he had developed many of his own strategies for learning his lines, which must have worked because he won numerous awards for his acting.

As a way of accepting and embracing his dyslexia, Henry has gone on to write a series of children’s books about a character called Hank Zipzer. Hank is based on Henry’s childhood experiences and he is a problem solver, he is very practical and likes making things.

How clever and resourceful of Henry to write a book that someone who also has dyslexia will get excited about reading. When his young fans write to him Henry makes sure he replies to every letter.