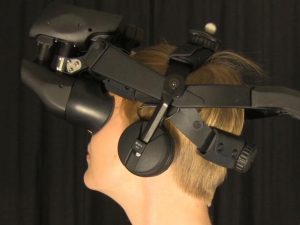 Researchers from Oxford University have found a ground-breaking method for treating people who are suffering from severe paranoia. By using top of the range Virtual Reality headsets, they found a massive causal link between a simulated reality and the reduction of severe paranoia.

The researchers used these top of the range VR headsets to track the users’ movements and let them experience a simulated world. They placed people suffering from paranoia in environments which they found stressful, like crowded trains or cramped lifts. By using the VR headset to experience stressful environments in a controlled setting, the patients were able to learn how to deal with them. A number of the patients reported a decrease in their paranoia.

It is known that around one to two percent of the population suffers from severe paranoia, this is usually the case with mental health disorders like schizophrenia. Sufferers may incorrectly believe that others are deliberately trying to attack, mock or upset them. This can become so bad that some patients are afraid to leave their house.

In the tests, the participants each used a VR headset and entered a virtual tube train which would become more and more crowded in each session. One of the group were encouraged to use their normal defence mechanisms but were told that the situation would become more tolerable as they got used to the situation.

The other group were told to drop all of their usual behaviours and were instructed to approach and look at the human-like characters inside the train, making eye contact or standing toe to toe with them.

The second group were seen to experience the biggest improvements. Over 50% of them said they no longer had severe paranoia at the end of that testing day. Even the first group experienced a better result. The results also showed 20% said that their paranoia had gone at the end of the day.

We might be seeing the future of treatments of Mental Health Disorders with the VR being used in similar ways to treat veterans suffering from PTSD with very encouraging results. Unfortunately, the VR are not able to simulate smells or feel, however this may be able in the future where VRs will be used in a 4d room setting where smell and feel will be added.

If you would like to know more about assistive technology, then please visit our Assistive Technology Training page www.learningsupportcentre.com/assistive-technology-training