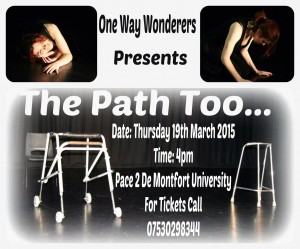 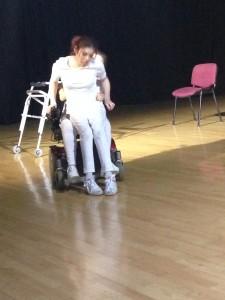 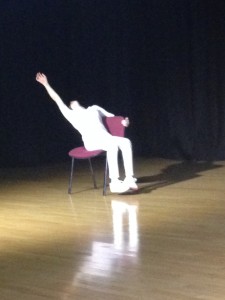 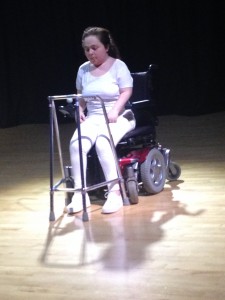 The word disabled, comes from the ideology that a person is in some way unable to do or achieve the things that other ‘non-disabled’ people can.  As a person with a learning disability, I despise the word. To me a person is only disabled if people think that they cannot do something. A disability is something that exists only if society does not support the individual by adapting to their needs.

I’m Jessica and I’m currently on a work placement with the Learning Support Centre and Jotters. I was invited to watch two students perform in their final year performance called ‘The Path Too…’ on March 19th in the Pace building at DMU.  I was truly inspired as I watched the students challenging their disabilities and push their personal boundaries and abilities in the name of art. The performance motivated me to interview the students about their performance piece.

I asked the students what initially inspired them to take up performing arts. Jodie, aged 25, has loved acting since the age of 10; however it wasn’t until she was 16 that she released that she could dance as well as act. Jenna, aged 24, had a different route into preforming arts. At school she studied art, however she later became interested in musical theatre which continued to grow and develop into a passion for dance when she went to college with Jodie at the age of 19.

During the performance, Jodie and Jenna wanted to express to the audience the difficulty that they go through when moving in everyday day life; in an aim to boost awareness and understanding of those with similar disabilities. They used movements that pushed themselves and showed how hard it was to move yet, they wanted to prove that despite their disabilities, they could still achieve this goal.  They used sound effects of heavy breathing throughout the piece as a technique to express that regardless of them being out of breath they continue to do things that test their ability and push themselves.

They wanted to highlight that even though they both have a disability they can do the same things as other people; they just have to find a different way to do it. They also expressed the idea of challenging other people’s prejudices. They mentioned they had felt excluded at certain points in their educational journey and often felt misunderstood.

Audience members also noticed how much effort Jodie and Jenna put in and other students stated that the piece changed their perception of what they could do.

I asked them whether there were any obstacles that they had to overcome during the performance,  they told me that the sequence where Jodie had to sit on Jenna’s chair was difficult as it was hard to find a safe way to carry out this action and it demanded a great deal of self-belief, trust and strength.

Jodie and Jenna achieved a personal goal by receiving a massive amount of positive feedback. They have been invited by a graduate of their course to perform their piece at the Choice Unlimited event next month. They have also been contacted by the head of the course at DMU who is writing an article on their performance to go onto the University website.

You can view this truly inspirational performance – ‘The path too’. At:   https://www.youtube.com/watch?v=uOXEVm3ftHA