At the end of September I attended a conference run by the Leicester Virtual School.  The conference was aimed at SENCOs and adoptive parents and considered the impact that early life trauma has on learning.  Even though most of the professionals attended were supporting primary aged children the effects of early life trauma can still cause distress for student in FE and HE.

So what is trauma? 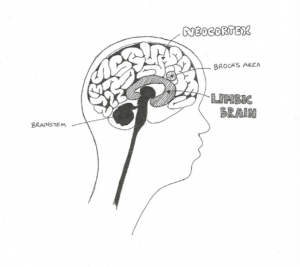 Trauma is “An emotional or psychological injury, usually resulting from extremely stressful or life threatening situation” (de Thierry, 2017).  Trauma prompts feelings of terror and powerlessness. There are many ways for someone to have experienced early life trauma and these include neglect, abuse and bereavement. Trauma causes brain damage, as it reprograms the brain about what to expect in life.

The brain stem is fully formed at birth and programmed for survival. When stimulated by terror or stress it floods the body with Cortisol and Adrenaline.  This takes the frontal cortex and Limbic brain “offline” and therefore limits rational thought as well as speech and language processing.  It’s vital to understand the trauma trigger in order to get brain back “online”.  During early life trauma the brain can be constantly ‘wired’ for survival and always in Fight, Flight or Freeze mode.

The symptoms of trauma are similar to behaviour traits associated with ASD and ADHD leading to many children and young people being misdiagnosed when really there was the need for a diagnosis of Developmental Trauma Disorder.

Some development can become ‘frozen in time’. Instead of the thinking that children displaying regressive behaviour is due to having missed out on that stage of development, it is now considered that their development was frozen at time of trauma.  Trauma blocks learning as the brain is so busy over thinking lots of different elements of the day to have room for learning.  Trauma can be seen as an invisible disability as the symptoms are a barrier to learning that need ‘reasonable adjustments’ to be made in order to remove the barrier.  Early life trauma that happened in the preverbal stage of development is harder to decode and recover from as the trauma happened before it could be verbalised and is usually hidden deeper in the subconscious.

As professionals that support students we need to understand that early life events can impact for many years and impede a person’s ability to achieve their academic potential.  We need to understand the effect that trauma has on the brain and be able to help our students to reduce triggers during our sessions with them and keep their brain on-line.