Earlier in February I attended a one day workshop looking at what it’s like to write when you have Dyslexia and tips for supporting students with Dyslexia.  The session was led by Dr Adrian Wallbank, a lecturer from the Royal Hammersmith University, London, who himself is an academic with Dyslexia.

It was so refreshing to hear someone else have the struggles as myself (as I also have Dyslexia).  I’m not the only one who needs a quick nap after an intense period of working or studying! Another refreshing aspect was the approach he took, so many times you hear about the pitfalls of having Dyslexia.

What it’s like to write when you have Dyslexia

Adrian approached the workshop with such positivism and started by outlining the benefits of Dyslexia.  His main theme was that students with Dyslexia think in images rather than words, so helping a Dyslexic student to visualise their writing can help the flow.  Also allowing a student with Dyslexia to write in a stream of consciousness, then edit or talk through the writing as due to the issues that Dyslexia causes with the transfer of thoughts from short to long term memory if you interrupt a student with Dyslexia then the train of thought can be lost, never to return.

To illustrate this Adrian had a partially completed PowerPoint slide that he had been writing when interrupted and had not finished as he had no idea of where that thought was going and what he wanted to say.  He moved onto talking about dual reading and text scrolls.  He described how the Dyslexic brain needs to be able to see the whole picture; therefore using electrical devices can hamper the progress of students with Dyslexia, when it comes to reading.

Tips for supporting students with Dyslexia

He recommended that students with Dyslexia print articles out single sided, then place them side by side on a desk to read so the student can refer back to parts they have already read or look ahead to other sections.

This aids retention and understanding as the brain then sees the whole process not an isolated part. Dual reading (having two different texts side by side can help understanding if there is a document you need to refer back to often, maybe a key text or two texts explaining the same topic.  Speech-to-text software like Dragon can be amazing for a Dyslexic student as their thought processes can run very quickly and too quickly to be able to type and think at the same time. 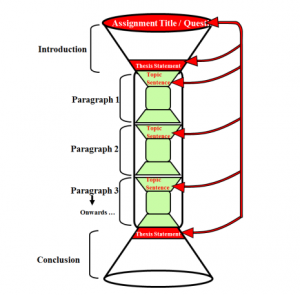 Many students with Dyslexia still prefer to write onto paper first or dictate (as these are quicker options and allow pen/speech and thinking to be at the same speed), then physically cut the paper up and restructure or rearrange as this works better visually. Adrian has also developed the Christmas Cracker visual to help students with Dyslexia funnel their ideas and help their writing. With the topic starting broad, narrowing down, then funnelling back out again for the conclusion.

I aim to use the Christmas Cracker with some of my students to see if it aids their thought processes when it comes to academic writing.  Full details on Adrian’s work and the Christmas Cracker can be found in his book: Academic Writing and Dyslexia: A Visual Guide to Writing at University, published February 2018 by Routledge.